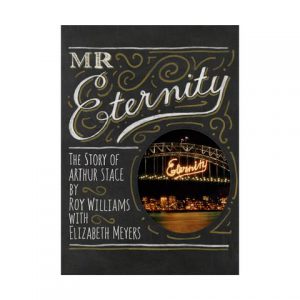 ‘Eternity’, Arthur Stace’s copperplate script graffiti, continues to fascinate people in contemporary Australia, long after his death in 1967. However, not all aspects of this famous Australian are viewed positively.

“We generally do not like religion in this town (Sydney), are hostile to God-botherers and wowsers and bible-bashers. We could not like Arthur because he was ‘saved’, hell no! We like him because he was a drunk, a ratbag, an outcast. He was his own man, a slave to no one on this earth.” (Author Peter Carey)

So, who was Arthur Stace? The biography, ‘Mr Eternity’, provides many answers.

Arthur Stace, ‘using chalk or crayon every day for almost 35 years’, wrote a one word message: ‘Eternity’. He wrote throughout NSW on footpaths, railway stations, anywhere and everywhere – ‘perhaps half a million times in all’, including on the Sydney GPO’s main bell! Indeed, he was a ’God-botherer’ – his motivation and message came from God. It is also true that for decades he was a drunk and a criminal.

Arthur Stace’s criminal activity seemed to be the inevitable outcome of a life formed in a dysfunctional family of alcohol fuelled violence. Born in 1885, even as a young child he relieved poverty by petty theft. Abandoned by her husband, Stace’s despairing mother handed the children over to institutional care. The teenage Stace found that work in a coal mine gave access to alcohol. He became a ‘mean drunkard’ and increasingly ‘abandoned himself to the (Sydney) underworld’.

Trauma, following service in the trenches of the 1st World War, contributed to Stace’s periodic arrests for drunkenness, although by the 1920’s he no longer engaged in Sydney’s underworld. The Great Depression resulted in mass unemployment. In 1930 a down-and-out Arthur Stace attended a meeting in St Barnabas Broadway’s School Hall for ‘a cuppa tea and a rock cake’. He heard the Rector R.B.S. Hammond speak of Christ and in the ensuing 37 years Stace would say, “I went to the meeting for a rock cake and came out with the Rock of Ages”.

Stace’s life was transformed by Christ. He gave up alcohol. He joined in the mission of St Barnabas’ Broadway assisting to rehabilitate lives broken by unemployment, poverty, alcohol and war service. Thus commitment to their welfare now featured throughout the rest of his life. He was 45 years of age when he became a Christian. If he was once a slave to alcohol and criminal conduct, he continued a slave, but ‘a slave to no one on this earth’, rather a slave to Someone who created this earth.

In 1932, two years after his conversion, Arthur heard Baptist preacher John Ridley conclude a sermon, “Eternity! Eternity! I wish that I could sound that word to everyone on the streets of Sydney. . . .Where will you spend eternity?” In Arthur’s own words he “felt a powerful call from the Lord to write ‘Eternity’. I had a piece of chalk in my pocket and, outside the church, I bent down there and wrote it.” ‘Eternity’, chalked in copperplate script, would become our nation’s most viewed graffiti.

An intriguing aspect of this graffiti ministry is the hiddenness for two decades of the artist’s identity. Only the intervention of Baptist Pastor Lisle Thompson in 1956 caused Arthur Stace at the age of 70 to reveal his identity via the Sydney Morning Herald as ’Mr Eternity’. This resulted in even more opportunities for the septuagenarian to share of his conversion to Christ and the resulting radical transformation in his life.

Arthur Stace’s dual commitment to welfare work and evangelism is an important aspect of this biography. His own experience of degradation, and then transformation through following Christ, fuelled his life’s calling. His skill and humour in handling interjectors during his open-air preaching was noted. His ‘inimitable style’ made him a sought after speaker. A local newspaper announced his visit, ‘Domain “Deadbeat” to Preacher’!

The various characters and their ongoing roles in Arthur’s life are well fleshed out. It was the Revd Hammond’s sermon that God used to awaken faith in Arthur Stace. Hammond’s influence and friendship were long-lasting and it was he who conducted the marriage service of Arthur Stace and Ellen Esther Pearl Dawson at St Barnabas’ Broadway in 1942.

Arthur and Pearl met as volunteers in a city soup kitchen. Pearl was a decade younger than Arthur and, interestingly, it was she who proposed to him! They are buried together in the Botany cemetery, their headstone reading “Rewarded and rejoicing in the presence of their Lord.” The footstone is engraved with one word in copperplate. You guessed it, ‘Eternity’!

‘Mr Eternity’ is an easy and fascinating read: a fine gift and an encouragement to faithful preachers!

This book review was published in the April 2018 edition of The Melbourne Anglican, here.