Scary descent of end of life ‘treatment’ – not Meals on Wheels but Death on Wheels.

Even the Royal Dutch Medical Association (KNMG) which supports euthanasia is not comfortable with the mobile death teams. the Courier Mail (Australia) reported that:

But the (KNMG), which represents 53,000 doctors and medical students in the Netherlands, said it was sceptical whether Life-end clinic doctors could form a close-enough relationship with a patient to decide whether an assisted suicide should be done.

“We are not against euthanasia if there is no other alternative,” KNMG policy advisor Eric van Wijlick said.

“But euthanasia is a complicated process. It comes from the long-time treatment of a patient based on a relationship of trust.

“A holistic view of the patient’s treatment needs to be taken, including whether another alternative to euthanasia exists.

“We have serious doubts whether this can be done by a doctor who is only focused on performing euthanasia.” 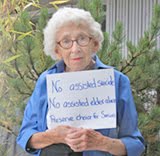 We agree, we have serious doubts that a doctor who is only focused on performing euthanasia will actually follow the loose, but often referred to as strict, criteria. We are particularly concerned with the ability to protect someone from elder abuse, which is difficult to identify and a growing problem in society.