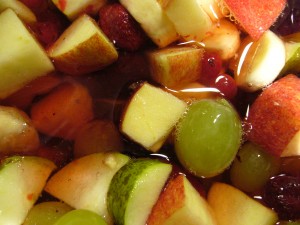 A fruit salad is not only nutritious if it is also used as an analogy to show the value of mixing different fruits/components together to make one whole new dish. Recently I attended a performance of Circus Oz where the illustration of a fruit salad was used to describe multicultural Australia: the various fruit, the different cultures/nationalities make up the one whole.

I like this analogy. I have also used it – at the time when we were combining three parish churches together to form a new church in Melbourne 17 years ago.

But at Circus Oz, for some reason, while I enjoyed the acrobats, I disliked the rhetoric.  The analogy came across as propaganda.

The MC appeared about six times throughout the excellent performances. The first three times the music group and MC parodied three important Australian tunes: God Save the Queen, Advance Australia Fair and Waltzing Matilda. For various reasons each song was said to be inadequate to represent Australia. There was no one song that was adequate to capture Australia’s spirit. (Later we were to be told it was because we are like a ‘fruit salad’.)

As the performance continued the audience was divided into various sections to sing parts of a humorous song and then divided into particular fruits. The message was clear: Each fruit contributes to the whole and is healthy and delicious in its own right. A fruit salad is not a blend of all the fruits, each fruit in a fruit salad retains its individual flavour. In the same way each cultural group in Australia retains the individual culture which remains identifiable and intact within the whole Australian society.

In the finale Circus Oz was representing Australia as a conglomeration of separate cultures. The MC illustrated the multiculturalism by pointing out the nationalities of the Circus Oz acrobats.

This was all good in its own way.  But I was still perturbed.  Why was I uneasy? I had used this very illustration to good affect when bringing three parishes together. A fruit salad does have a different taste to the individual fruits which comprise it. A fruit salad is not the same as eating each particular fruit.

But, and this is what Circus Oz failed to communicate, the single whole is not a mere conglomeration.  It must have unity and its own, new, identity.  There needs to be an overarching narrative giving fundamental values to the health and life of that which is formed, the new culture.

What is the flavour/culture of the fruit salad? In combining three parishes together there was an overarching Biblical narrative which gave purpose, behaviour and life. We were not afraid to affirm that the culture of the three individual parishes would need to die to themselves that they might rise again to be a new people of Christ together. Jesus’ words “Unless a grain a fruit dies, it remains alone, but if it dies, it rises again.” As Christians we were not afraid to allow a particular form of parish life to die, because we knew that in Christ the new culture of our Christian community would be held and shaped and given life by the Spirit of Christ.

Without the sense of “dying to have life” a fruit salad culture is a poor form of multiculturalism.  It is difference without unity, interaction without inter-relation.  It is a self-serving ‘hold fast’ without giving of oneself to the other.  Australia is not just a collection of different fruits, in God there are purposes for us all to share together.