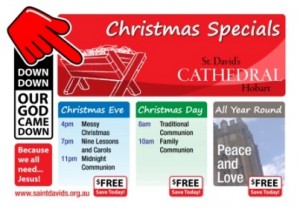 In relation to Christmas tackiness I thought I had seen it all.

But I must admit to being blown away by St David cathedral’s advertisement in the Christmas services guide(Mercury, December 24).

While the Pope warns Christians to look beyond the Christmas glitter, the Anglican Church of Tasmania looks glitter square in the eye and comes off second best.

How crass can it be for a church to make use of a well known supermarket’s advertising campaign to spruik attendance for its own supposedly otherwordly Christmas celebration.

St David’s, and all who sail in her, would do well to meditate on Christ’s driving of the money changers out of the temple.

I wonder if the supermarket will sue or if they’ll just thank God for the free advertising.

Reply from The Dean:

I am sorry that Greg Mansell (Mercury, December 28) found the Cathedral adverstising crass but it is far more worrying that he thinks that Christmas is an otherworldly celebration.

The Christian Christmas message is that in Jesus God became this worldly, that Down Down our God came Down.

That is what we celebrate at Christmas and should impact our lives throughout the year.

He came down into this crass world of advertising, politics and need, which should transform how think about this world, each other and particularly those in need, like asylum seekers.

This message of God’s free self giving also fundamentally undermines the selfishness of consumerism, hence the parody of the ad where everything is free.

If consumerism has stolen Christmas we were in our small way trying to steal it back.

There is more information in my Christmas Day sermon at http://www.stdavidscathedralhobart.org

Is the Cathedral’s use of an advertisement a good example of meaningfully communicating the Gospel of Christ in a local context?

or  Has the Cathedral lost the Gospel in its attempt to communicate relevantly in its cultural context?

NOTE: Contextualising the Gospel is a challenge. See, What is Contextualisation? my Address for BCA Mission Australia 2001.

Contextualisation is “the various processes by which a local church integrates the Gospel message (the “text”) with its local culture (the “context”)”. The text and context must be blended into that one, God-intended reality called “Christian Living”.

Culture Missiology makes use of cultural anthropology to elucidate culture defined as, “a dynamic system of socially acquired and socially shared ideas, according to which an intersecting group of human beings is to adapt itself to its physical, social and ideational environment”.