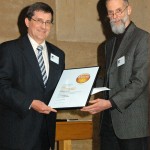 Acorn Press is delighted to inform you that two of its books won awards at the 2011 SPCK Australian Christian Book of the Year Awards in Melbourne.

The Chair of the Acorn Press board, the Rev’d Paul Arnott, said he was thrilled by the awards.

“Both awards are a wonderful tribute to John Wilson’s passion for Australian Christian writing. John had the vision for Ian’s book, which is expertly crafted, and succeeds admirably in addressing a wide range of economic and faith issues in a country that often worships the almighty dollar.”

He said, “John’s own book on Christianity and Islam is beautifully written. It is the fruit of a decade’s reflection on the world’s two largest religious faiths and provides us with a rich picture of both the Muslim and Christianity, as they are laid alongside each other. They are many similarities and some striking contrasts.”

Details of the books can be found on the Acorn website at www.acornpress.net.au

One of the nation’s leading economists has won the Christian Book of the Year award with a book he regards as one of his most significant contributions to civic life in Australia.

Subtitled ‘An economist reflects on the meaning of life, money and what really matters’, Professor Harper proclaims economics a good servant but a bad master. One of three panellists appointed in January 2011 by the Baillieu Government of Victoria to carry out an Independent Review of State Finances, Harper declares that ‘economics makes a valuable contribution to clear thinking about important questions that focus on humanity’s material condition, yet it is not a philosophy for the whole of life—and was never intended to be’.

The Awards were judged by an interdenominational panel of judges and presented by the Society for Promoting Christian Knowledge Australia (SPCKA). Australia’s first library of 4,000 books was sent with the First Fleet in 1788 as a gift to the new colony from SPCK UK. The organisation was founded in 1698 to distribute books and pamphlets in the ‘new world’.

Click here for my blog on ‘Christianity Alongside Islam’ by my dear friend Bishop John Wilson.

Also click here for the Australian Christian Book of the Year Shortlist and here for SPCKA’s media release.