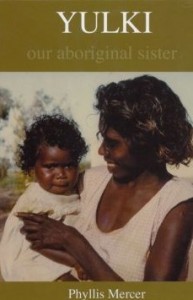 Last November COMPASS ABC TV aired a show about Yulki: Arnhem Land Priest (see my blog post about it here). Now her amazing story has been written down in a book, “Yulki: our Aboriginal sister” by Phyllis Mercer.

At the age of 21 Phyllis Mercer, a graduate of Melbourne Teacher’s College, left her parent’s home in Melbourne to join her husband John Mercer in the task of pioneering at Rose River, now called Numbulwar, in the remote south-east of the Northern Territory… It was there she met Yulki, also a newly married woman. They became companions. Phyllis was the only white woman in the area for most of the time up until new staff arrived nearly three years later. Phyllis’s lifestyle had completely changed for she had no vehicle and no modern conveniences. The Lord had called her to be a missionary and He had prepared her for the changes and given her responsibilities to bring the message of the Gospel to these Aboriginal people. Yulki was one of them who embraced the Gospel… (excerpt from the back cover of “Yulki: our Aboriginal sister” by Phyllis Mercer)

Many thanks to Phyllis for recently sending me this book in the post and for putting this amazing story down into words. Please let me know if you are interested in purchasing this book as Phyllis and her husband, John hope to come down to Hobart in May to make it available for purchase.